Edit
watch 01:36
We're Getting Mutants in the MCU - The Loop
Do you like this video?
Play Sound

The Gigantic Submarine Cross Sinker is the boss of the sixth stage of Strikers 1945 II. It is a gargantuan submarine stationed off the coasts of Brazil by the time it is attacked by the Strikers.

The Cross Sinker's hull has a distinctive dagger-like shape, which is uncommon amongst WWII-era submarines. Once it fights the Strikers, the submarine extends its sides to reveal two large bullet launchers, giving it the view of a religious cross when looked from above, hence its name.

When the Cross Sinker takes enough damage, it flips over to the back to transform into a crab-like mecha. It has a red claw on its left arm that darts down-leftwards on attack, releasing bullets from its back in the process, and a gun on its right arm that fires either a straight, trident-patterned shot or a wide-spreading shot to the right. It can also transform into a second mode that releases bullets in a wide conical pattern, giving it the view of the letter X, which can also be interpreted as a cross. 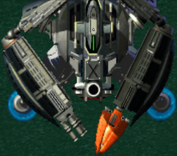 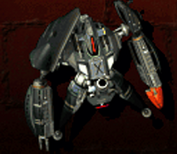 Cross Sinker in the results screen

Community content is available under CC-BY-SA unless otherwise noted.
Advertisement